Mercatox Review – Pros and Cons of This Exchange 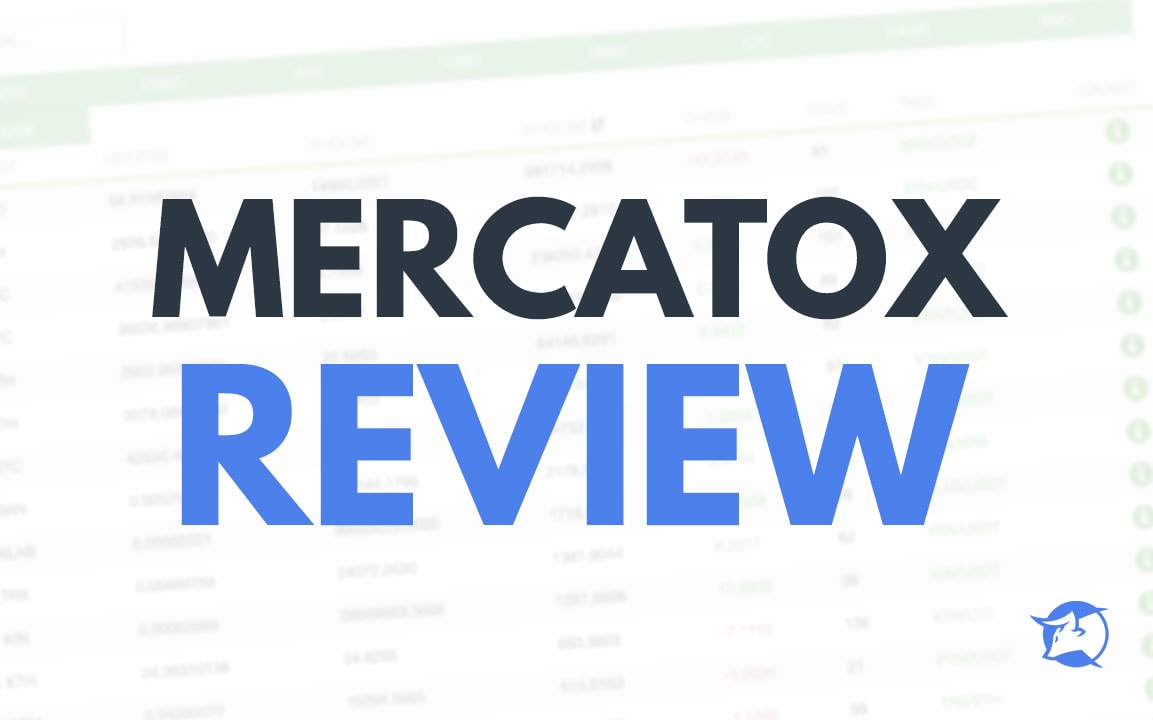 If you’re in search of a new cryptocurrency platform, you may have come across Mercatox. This platform aims to provide for all of your crypto needs in one place. Mercatox includes a variety of features such as trading, lending, wallets, payment systems, news, and more. Learn more about this cryptocurrency platform by reading our complete Mercatox review.

Mercatox is a cryptocurrency platform aimed at providing a wide range of crypto financial services from trading, to lending, to wallets, to payment systems. Their platform was created all the way back in 2016 and is available to users all around the world. 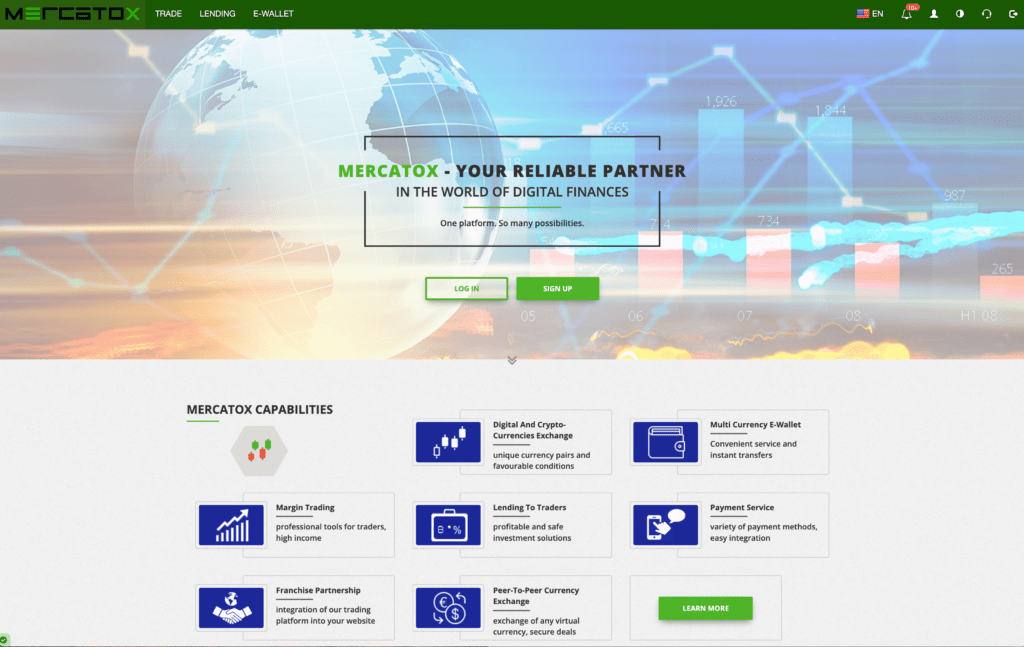 Mercatox has hundreds of supported assets and trading pairs; however, most of those pairs are paired with BTC or ETH. They still have a handful of assets paired with stablecoins, but depending on the assets you like to trade, you may have to execute multiple trades if your unit of account is not Bitcoin or Ethereum. They also only support limit orders at the moment despite advertising otherwise, but market and stop orders could easily be added in the near future. Margin trading is also something they plan to incorporate into their platform very soon.

The trading interface is not the best, but certainly acceptable and easy to use. The order panels and markets are readily accessible and user-friendly, but the charts are a little unusual. They say the charts are powered by TradingView, but the actual chart panel is long and rectangular, and even if you click to see the chart in full screen, the candles look a bit squished. It’s certainly usable, but far from ideal. 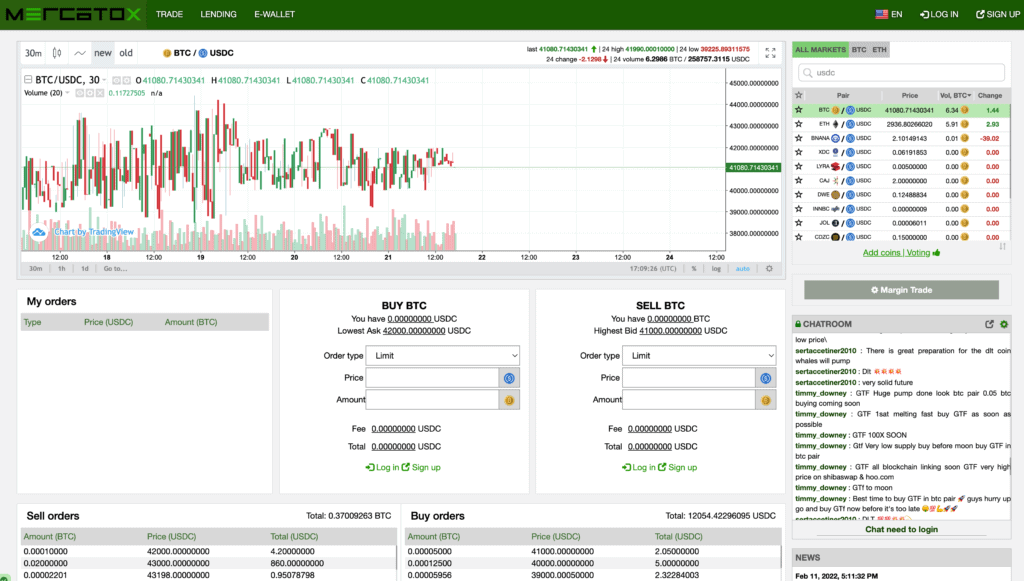 While Mercatox clearly advertises lending as one of the their main tabs, it isn’t accessible from the United States or any other country via a VPN. It’s possible they haven’t fully rolled out that service, but the tab has been up on their platform for several years, so I doubt that is the case. Perhaps they removed it due to regulatory scrutiny, but, irrespective of the reasons, it remains inaccessible.

Mercatox also emphasizes its e-wallet as one of the three main tabs, advertising capabilities such as instantly sending and receiving transfers within their system, depositing and withdrawing to your account free of charge, and the ability to pay for various purchases using your Mercatox account. Their wallet also has an API integration for users to accept payments on their website, which is somewhat unique but not quite as intuitive or smoothly executed as something like FTX pay. Overall, the wallet is pretty well put together and easy to use, but also fairly standard within the industry. 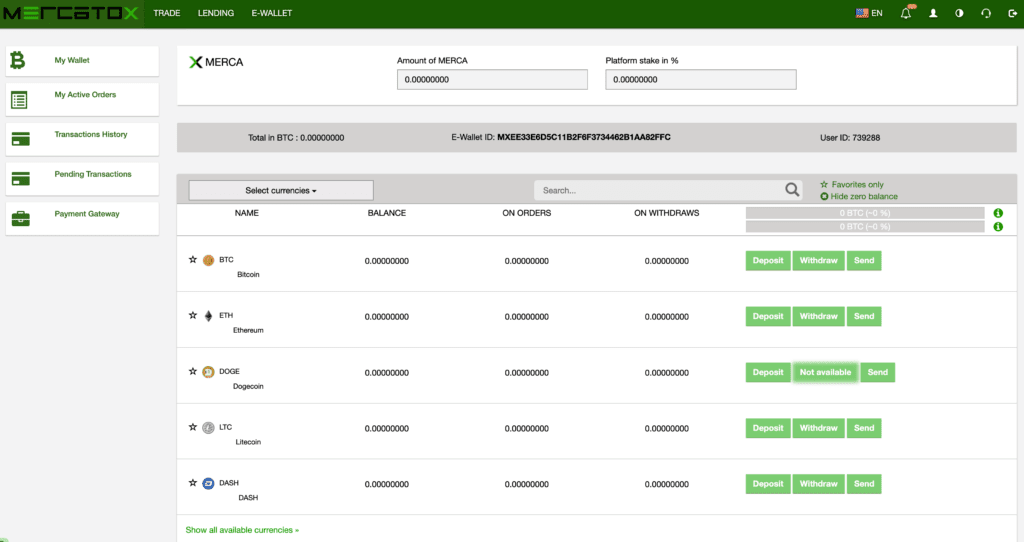 If you scroll to the bottom of the Mercatox homepage, you’ll notice a statistics tab that redirects you to a page with all their supported pairs, their prices, trading volume, and a couple other data points. The name statistics is a bit misleading as it’s really just a generic price page offering the same statistics as pretty much any other platform’s price page. It’s hardly comparable to the statistics of exchanges like Binance or many DeFi exchanges like Curve Finance and Bancor, but it’s still worth knowing it exists if you want an easy way to view prices and volumes outside of the markets panel in the trading tab. 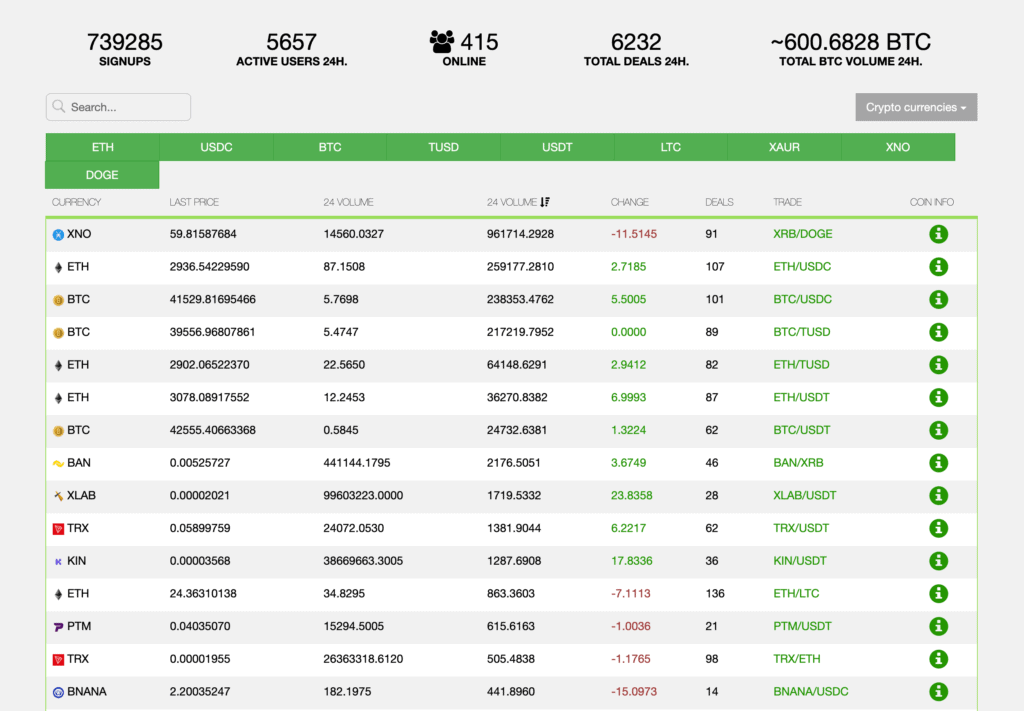 Like many platforms, Mercatox has a news section (also accessible at the bottom of their homepage). It would perhaps be more aptly named notifications as all the content is about newly listed assets. There aren’t any articles, and all the updates are just a sentence or two explaining what new market or swap feature was added. Still useful in its own right, but it’s by no means a traditional news aggregator.

Mercatox also has various withdrawal fees such as ~0.0004 BTC, 0.008 ETH, and 50 DOGE. Among brokers that charge withdrawals fees, these are pretty standard rates, but there are brokers (like FTX) that don’t charge anything unless it’s an ERC-20 token, so it still isn’t ideal.

Mercatox has a support center you can find if you scroll to the very bottom of their homepage labeled as “support.mercatox.com.” It would be nice if they explicitly advertised it as a help center and placed it at the top of their homepage, but it’s a decently-developed and helpful resource nonetheless. The UI definitely needs some work, and there is a lot of information missing, but each section is organized and often includes step-by-step picture walkthroughs. 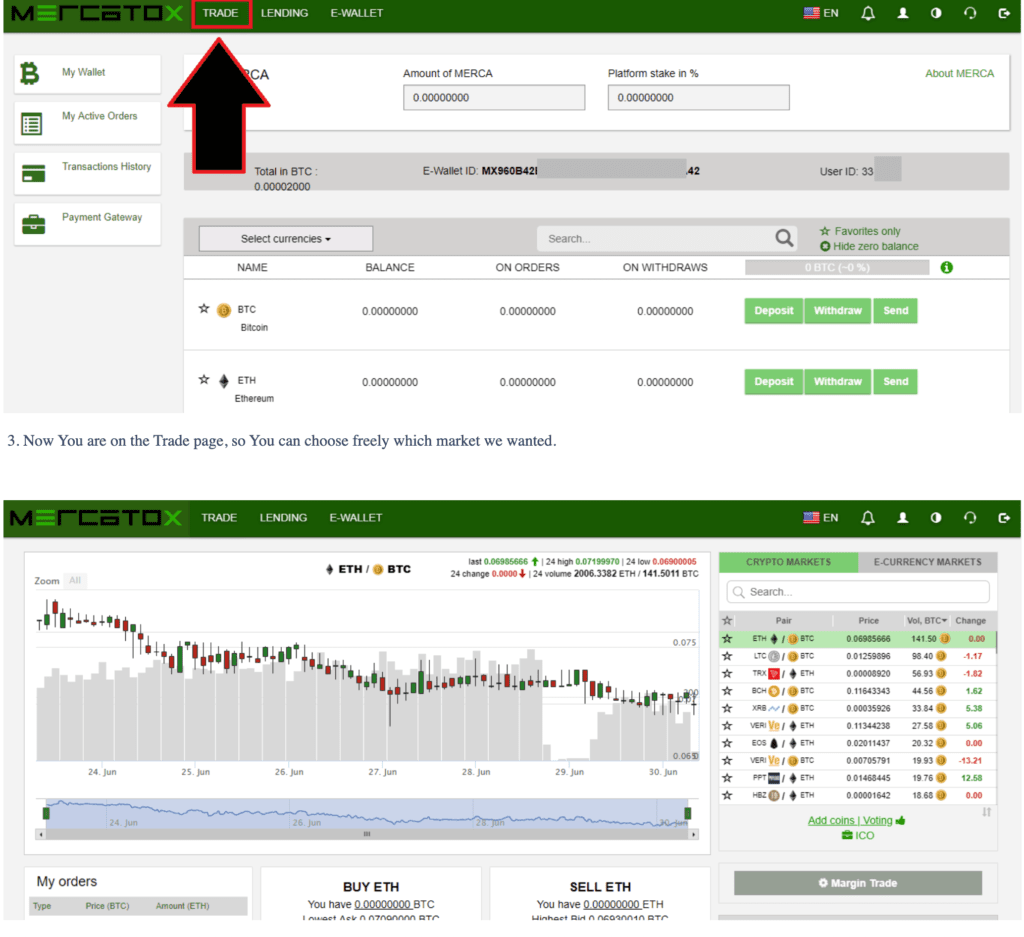 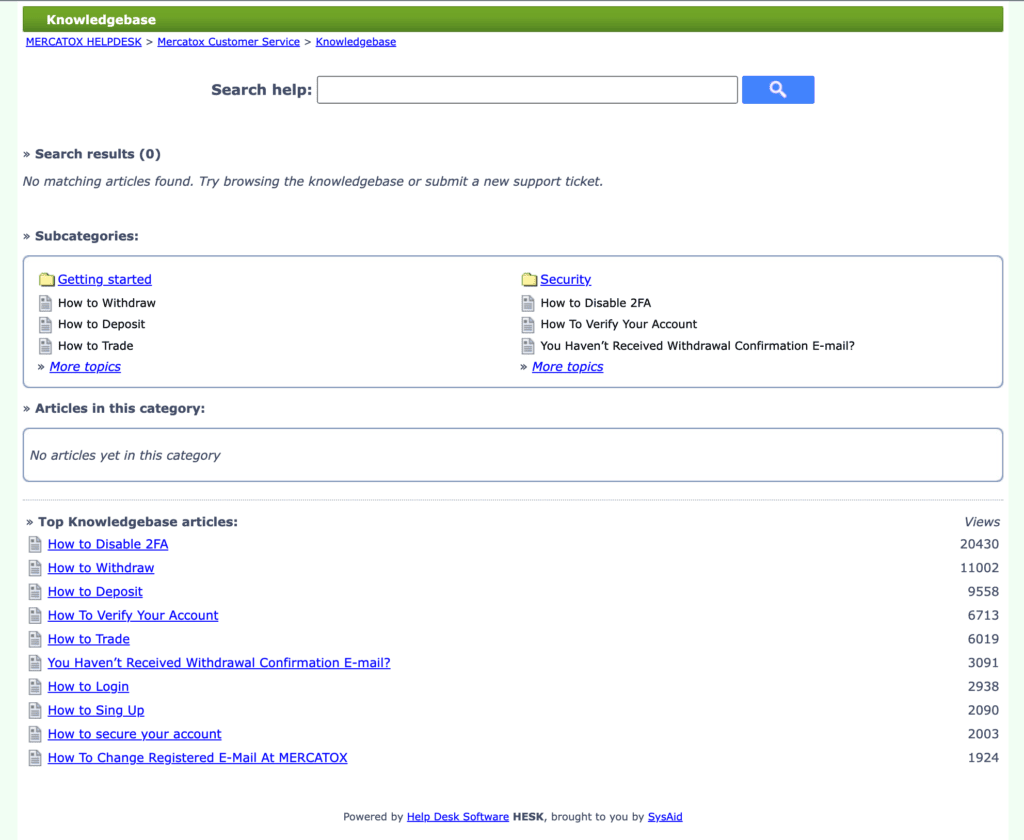 Mercatox is clearly a developing platform with a lot in the works and considerable room for improvement, but it’s still a useable exchange. The trading interface is decent, and they have a lot of markets, though not as many stablecoin markets as most traders would probably prefer. As for their other services, they are are pretty underwhelming. The lending isn’t accessible to those in the US or any of the dozen other countries I attempted through a VPN, so it’s hard to say how good or bad it even is. Their news and statistics are borderline negligible and their support center, although detailed with picture walkthroughs, doesn’t include information on a fair amount of relevant information, including their lending services.

In short, it’s a platform with a lot of problems and will certainly struggle to compete with any major exchange, centralized or otherwise. It’s possible they keep improving their services, but considering they’ve been around since 2016, it’s hard to imagine the improvements in the next year will be that much of a change. In summary, I would probably steer people toward other platforms for their crypto needs, but it’s always worth checking every platform out firsthand because you never know if their interface really resonates with you, which would likely be the only reason to choose Mercatox over alternatives. 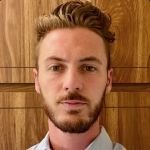 Austin DeNoce is a writer, personal investor, and entrepreneur who is focused on trading and investing education for macro, crypto, equities, derivatives, and foreign exchange traders. He graduated from the University of California, Santa Barbara with a bachelor’s in philosophy and carries a deep passion for a first-principles approach to investing and education therein. Austin specializes in topics related to cryptocurrencies and blockchain technology. 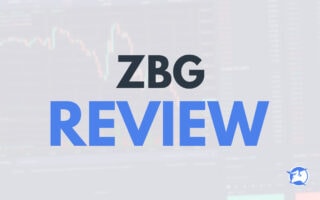 ZBG Exchange Review – Pros And Cons Of This Crypto Exchange 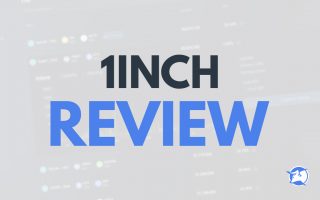 1inch Review – The Pros And Cons Of This DEX 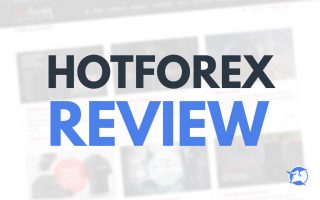 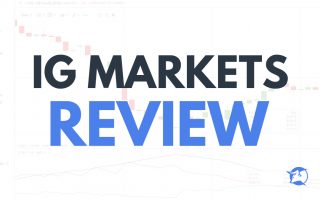